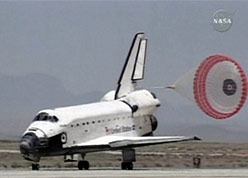 Well I don’t have a problem per say with Sunita Williams. She has reached some amazing milestones including the honours for longest stay in Space. My problem is with the fact that media claims her to be an Indian, and then running SMS campaigns for her safe landing. What about the other six on board, aren’t they also entitled to our good wishes. The bigger problem is when they claim her to be India’s daughter, when her nationality is American and also her birth place being Euclid, Ohio, USA. So can somebody explain how a person born and brought up in America with an American Passport be an Indian Property. Another thing being her father stating that “Sunita is India’s Daughter.” I just have one thing to say, how can a person who ditched his Indian passport in favour of an American Passport, dedicate his American daughter to India.

When will our media stop claiming people who are not Indians to be Indians and concentrate on much more important stuff. People like Bobby Jindal, Sunita Williams, Kalpana Chawla all have some ancestral roots to India and nothing else. What have they given to the Indian society other than confirming the facts that you won’t make it big in India, go abroad.

People like Lakshmi N. Mittal are much better who at least haven’t given up their Indian Nationality (its a different fact that he enjoys huge tax benefits under UK’s domicile tax policy).

I hope our media stops giving such people useless attention, and give me news that actually makes a difference to my life.