This is the leaked version of Google Talk, and it features tons of improvements over the current version 1.0.0.86. The most significant being the addition on customizable user pictures, a few little conversation window themes to complement it and a few new options to customize your buddy list. 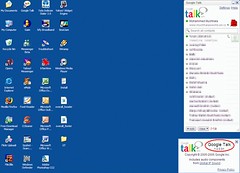 Let’s start with the new options to sort the buddy list. Well now we have:
• Show One Page
Nothing new, has been there since day one.
• Sort by Names (NEW)
A nice little feature, that puts all your contacts in Alphabetical Order, irrespective of their Status i.e. Online, Offline, Not Added, etc.
• Show Pictures (NEW)
Turn ON of OFF the custom user pictures.
• Also show Gmail Contacts (NEW)
Lists all your Gmail Contacts, just incase you want to see them for some reason. 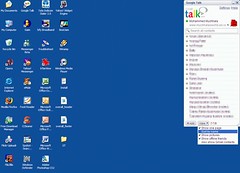 Also one noticeable new addition is moving the Mail Notification to the main window.

Next up, are the customizable user pictures. The biggest change and update of this version. Google has bundled 30 pictures, and is the main reason for its package size to be bumped up to 1.3 MB from the earlier 0.9 MB. 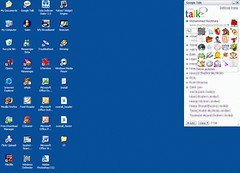 By default it gives you a no face picture. To change it all one has to do is point at the picture and you have a drop down arrow and on clicking it we get a preview of about 25 pictures, with an option to choose any other pictures from your comp. 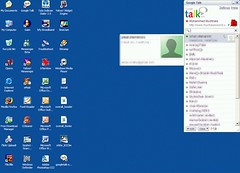 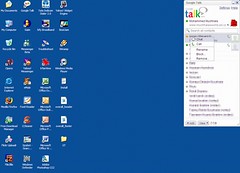 Hovering over your contact gives out its details, with a bigger 64×64 picture of your buddy. They have moved the Email /Chat/Call options, from there and are available no where in the main window as previously unless u right click on it. To get that good old Email button one has to activate the chat window. This brings me to wonder whether Google is working on enabling offline support because there’s all more evidence to point to it. Also noticeable is that there’s no underline below your contacts name, when you run the mouse over them. 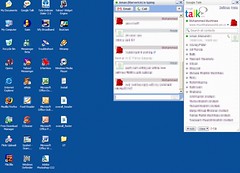 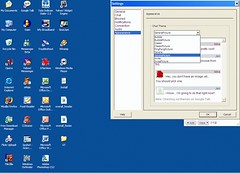 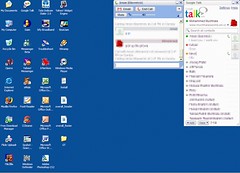 The Voice Chat is still the best one can find. Works perfectly even on a dial up.

The other apprecatable thing about Google talk is that its not a bloatware, unlike its competitors.

Well now to all the missing stuff:
• There are no emoticons yet, even though Gmail Chat now has some pretty decent smiles. And I would say this is the biggest shortcoming of Google Talk.
• No File Sharing.
• No Chat window text editing. (You have to use * for bold and _ for italics)
• No Buzz/Nudge function.
• No sleath settings as in Yahoo! Messenger.
• No offline messages yet, but I have a strong feeling its going be out soon.
• Also the announced interconncetive between different protocols is still being awaited.

So Overall I would give it a 2.5 out of 5 for this build. With its main USP still being Voice Chat.